Skip to content
3 noviembre, 2015 by KUBUKA No comment(s) Proyectos

My name is Elisabeth Manjasa and I am the Head Teacher of Grace Humanitas School in Kibera. I am 34 years old, married and with a family of three children named Britlian (12), Norah (7) and Benjamin White (2). I grew up in the Western part of Kenya. My parents separated when I was 3 years old, so different relatives brought me up. Life with them was hostile, but I thank them because they made me who I am today. 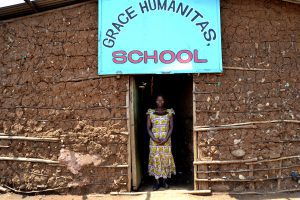 After high school, in the year 2002, I decided to move to Nairobi. I wanted to become a teacher, but I didn’t have the means. I started working in a school in Dandora, one of the many existing slums in the city. By then, I was earning 1200KSh per month (around 10€).

The next year, I moved to Kibera, convinced by a friend who told me that there I would be able to work for a better salary. Here in Kibera, I found a job in a primary school. I was promised I would be paid, but I didn’t even earn a single cent. Even if it was painful, I continued working in that school while looking for another job, asking my heart what I could do to make a living and to become a teacher.

I then started inviting children with difficulties for extra lessons after school in my house and asked the willing parents to pay a little for these lessons. Through these extra lessons, I began saving little by little and started dreaming of opening my own preschool.

In 2005, I spoke to a priest that allowed me to use the church room to set up a school, in exchange of a small rent. I bought a blackboard and some sacks for the children to sit on, since I didn’t have money for desks. When I began my pre-school, the word spread and neighbours brought lots of kids. My class was filled in the first three weeks. Through this project I learned many things and managed to live well and even save some money, thanks to which I was finally able to join Teacher’s College. 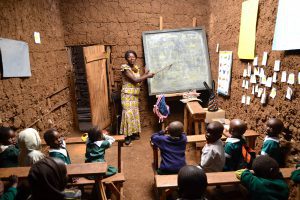 In 2014, I met some Spanish volunteers that were looking for a school to support. I realized their aim was to facilitate a better learning atmosphere for the children and decided that I wanted to be a part of their project. I take this chance to thank the entire family that has made it possible and has brought us this far: Mas Por Ellos (Lisha Mtoto Initiative), the Humanitas School in Madrid, and all of our individual sponsors.

The union between all of us has led to great achievements in our school. As I recall, the first change was to move the school to a place with space, good rooms and safety for the children. Since then, the improvements just continued. In previous years, for instance, we didn’t have materials to facilitate a better education for the kids, but currently we have access to almost everything a child requires for good performance in education. We now even have a kitchen to provide our students with healthy breakfast and lunch everyday, which is very important for them to perform well academically. 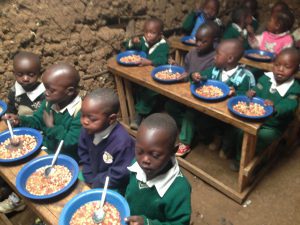 Thanks to the improvements and the support, today we are a legal school, registered and certified by the Government. I send my gratitude to all who contributed towards the investments made in our school. I would also like to assure our volunteers and everyone involved that their efforts to support our school are not in vein. 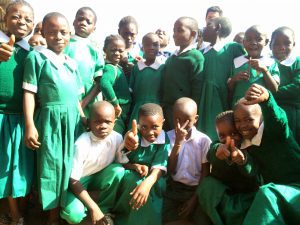 The rest of the teachers and myself will keep working hard to promote quality and effective learning in Grace Humanitas School. May you continue supporting our school and giving our students the opportunity to make a difference. Thank you and thank God. God bless you.